Hi all and welcome to todays blog, I am Danny Hodgson a Master Chimney Sweep.

Just what nests in chimneys in the UK? why are they bad for the system? how do we get rid of them? and how do we prevent them from entering the chimney system again?

Jackdaw and rook nesting season generally starts in april and finishes in july but it can start sooner and finish later from mid march to mid august.

The nest is made with twigs and is often lined with hair, rags, hay, bark soil and many other materials. Jackaws nest in close proximity to rooks.

This makes the nests very difficult to remove as they often compact on the bends of the chimney. You will see the jackdaw and rooks enter the chimney system dropping twigs, barks and other objects to build there nests. 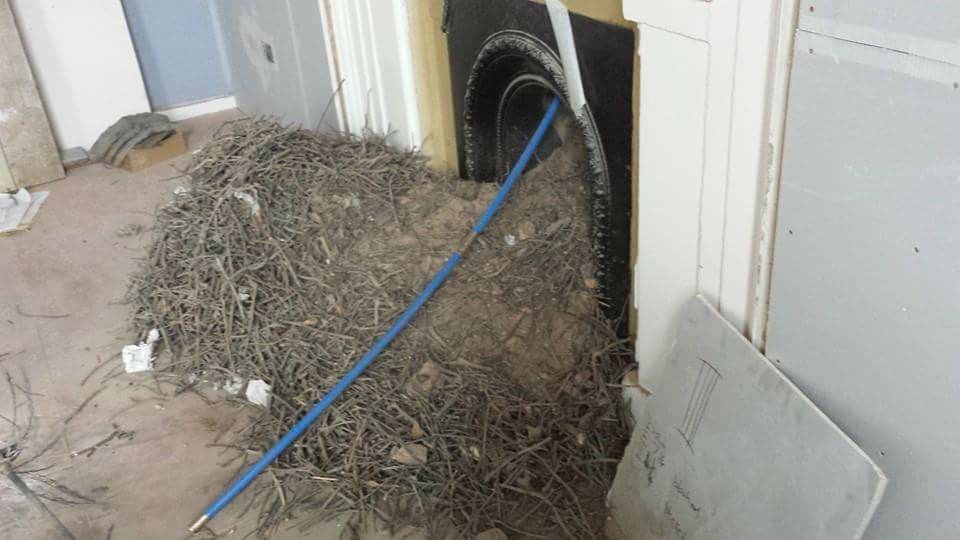 Why are birds nests an issue? 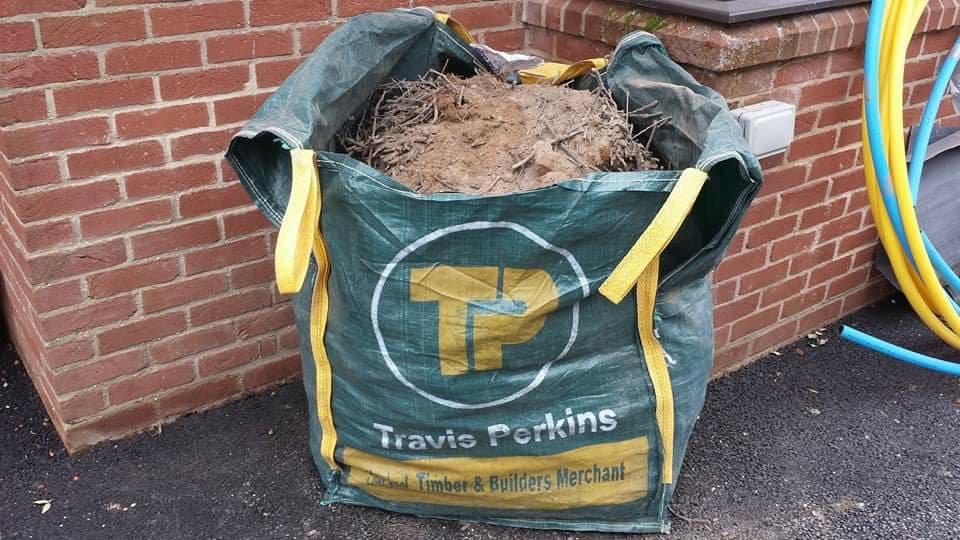 How can we get rid of birds nests?

Your professional chimney sweep can remove the nest when the younglings have fledged, if a nest is removed where young and eggs are still present unless the fire is a primary heating source you can be liable for a £5000 fine. A permit can also be purchased by the chimney sweep to remove and destroy live young if the nest is causing a health risk to the occupier.

We use state of the art equipment to make removing your birds nests as efficient and as quick as possible. Using a nest buster and rotary powersweeping equipment to break through the nest, breaking it down and removing it layer by layer checking with a cctv camera that the nest is completely clear of the system. 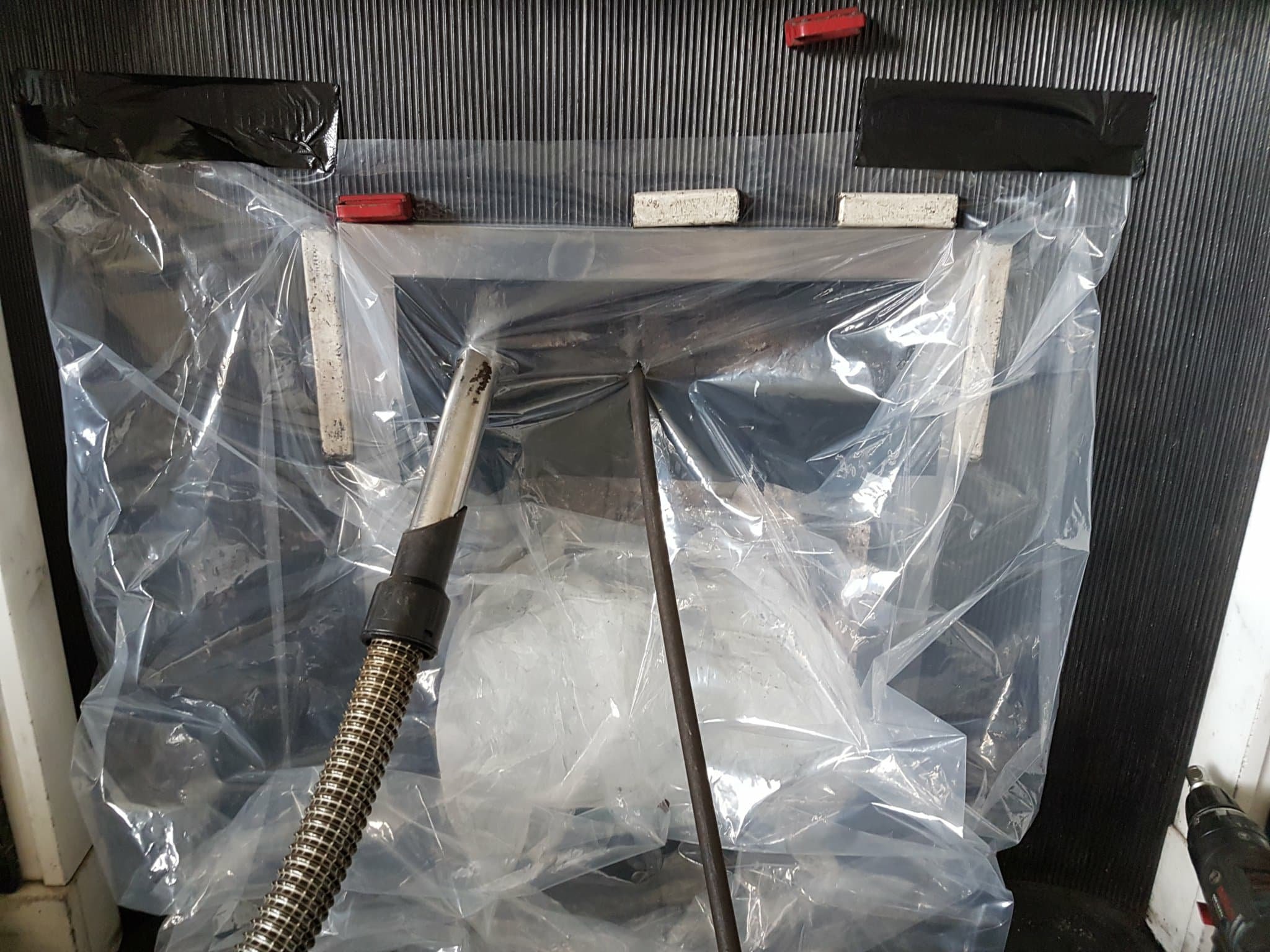 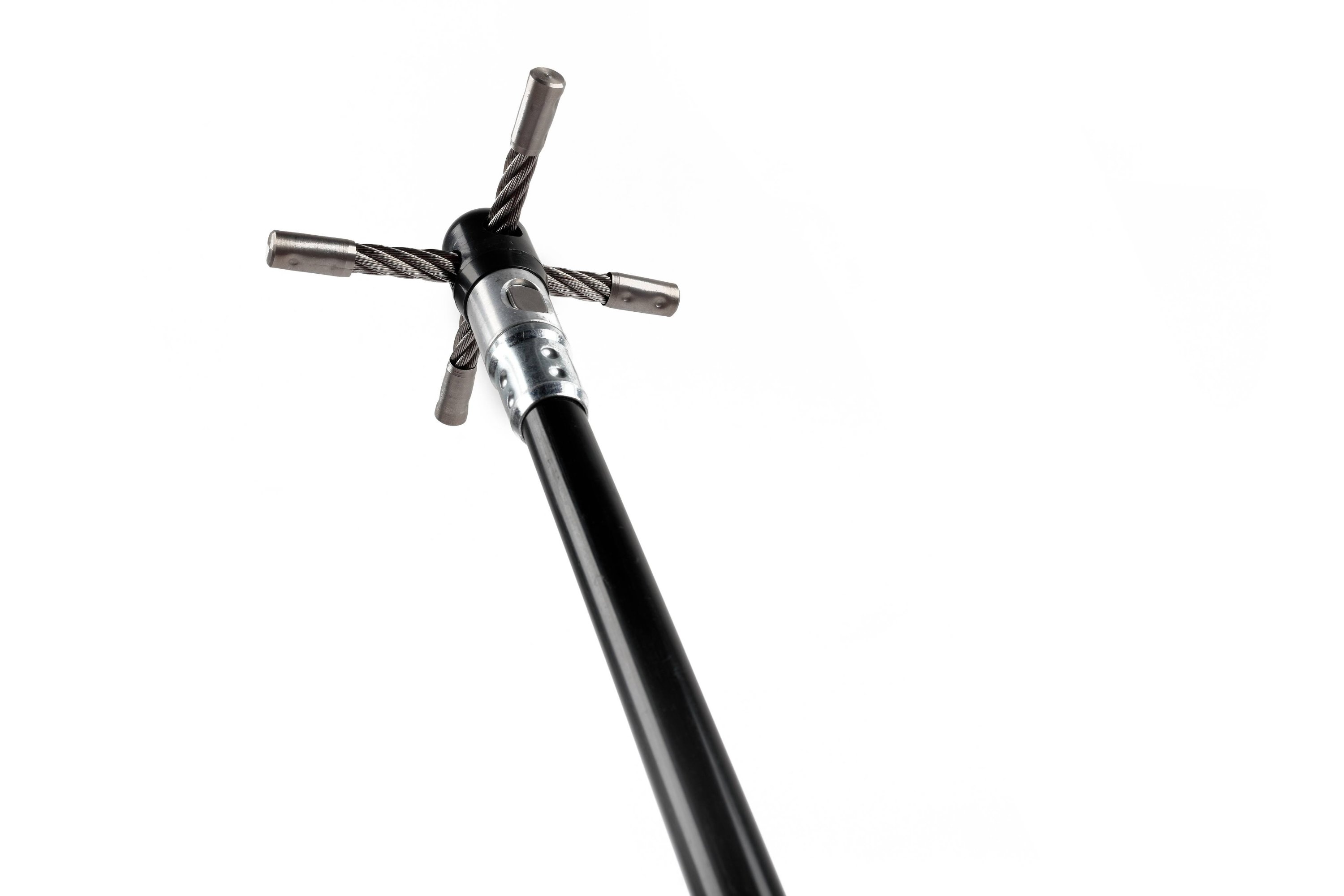 How can we prevent them?

Once the nest is removed a suitable chimney cowling must be installed to prevent further nesting. 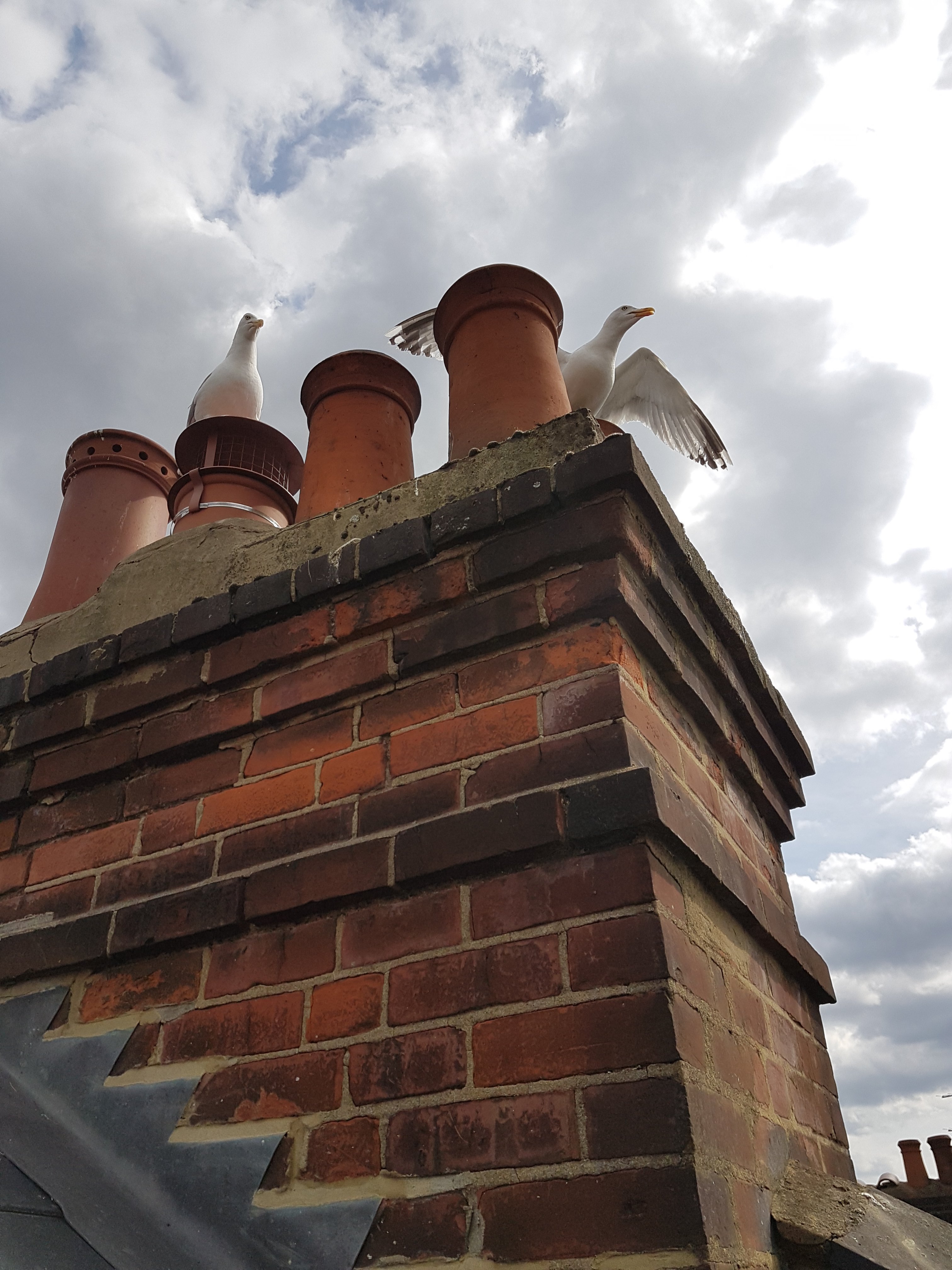 Wasps and bees nest in chimneys and flues too. They create a honeycombe type nest which is rock hard and sometimes full of honey. This nest causes a complete blockage in the system and must be removed. Due to the structure, the bees and wasps nests are extremely flammable. Do not light the fire if you see bees or wasps a chimney fire is likely and so is carbon monoxide poisoning. 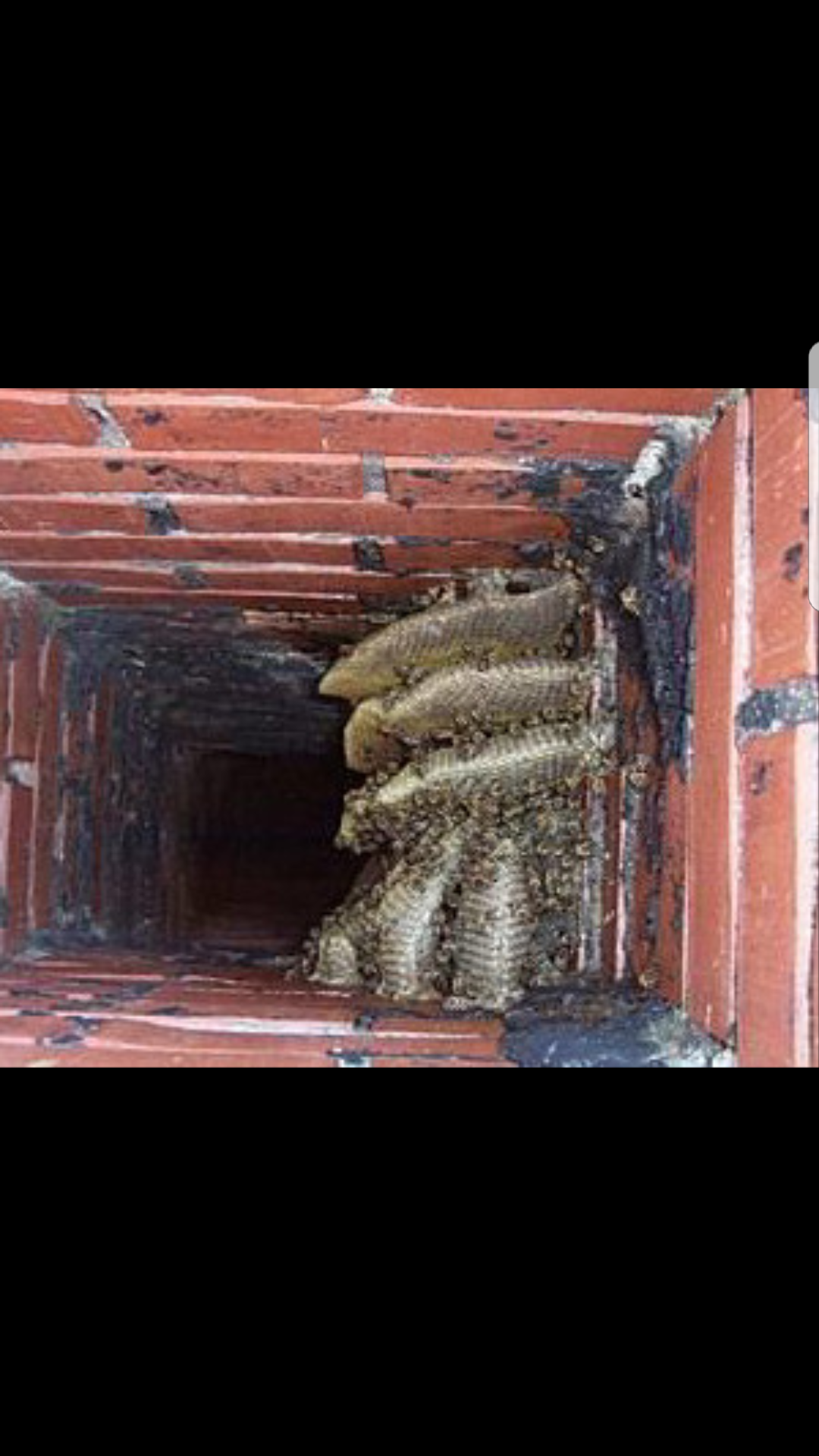 Due to the nature of bees and wasps pest control must be called first to kill the bees or wasps, it is very unlikely that the bees can be relocated due to where they nest in the chimney.

Once the bees nest is fumigated the chimney sweep can remove the remainder of the nest, the best way to do this is with an old set of rods and brushes as they will become very sticky.

A wasps nest is a similar process but there is no honey.

There is no prevention method for wasps and bees nests but a hightop birdguard is a good starting point.

Squirrels nest in chimneys too! They are also very territorial and carry some nasty diseases;

A squirrels nest is built similarly to a birds nest and is removed and prevented in the same way. If squirrels reside in the chimney flue, then pest control need to remove the squirrels before the nest can be removed.

So, in conclusion nests cause damp, carbon monoxide poisoning, chimney fire, disease and infestation the only sensible and reasonable option is to remove the nests and prevent them. If you hear scratching or fluttering inside your chimney then it is time to call on you professional chimney sweep.

9 Responses to “Critters and birds in chimneys, why evict them?”